The pins will fall for the final time.

After 61-years in business Palos Verdes Bowl will close its doors on Friday. In anticipation of the closure regulars have been flocking in for one last game in Torrance on Tuesday, January 28, 2020. (Photo by Brittany Murray, Press-Telegram/SCNG)

Palos Verdes Bowl, a Torrance fixture for 61 years, will shutter at the end of Friday, Jan. 31, to make way for a new shopping center that will have an Aldi’s grocery store as its anchor.

Palos Verdes Bowl, which opened on Crenshaw Boulevard in 1958, has long been iconic in Torrance, with its stone face and landmark neon sign. Once inside, the familiar bowling-alley echo — balls rumbling down the 40 wooden lanes and pins scattering — dominates the senses.

The bowling alley, like multiple others in Torrance, once operated 24-7, its packed lanes abuzz at all hours with workers from aerospace companies and defense contractors, said Charlotte Melsh, the manager for the last 25 years, who many know simply as “grandma.”

But bowling started declining as soccer — the American Youth Soccer Association was founded in Torrance — increased in popularity, Melsh said. That broke the lifetime association with the sport, which had seen child bowlers continue as adults and then as seniors.

Yet, even as it shrank in size, the die-hard bowling fraternity at PV Bowl endured.

After 61-years in business Palos Verdes Bowl will close its doors on Friday. In anticipation of the closure regulars have been flocking in for one last game in Torrance on Tuesday, January 28, 2020. (Photo by Brittany Murray, Press-Telegram/SCNG)

That fraternity included regular groups of adults with developmental disabilities, who were charged $3 per session and never had to pay for bowling shoes, Melsch said; many left PV Bowl in tears this week after their final outing, she said.

“This isn’t a bowling center, this is a bowling family,” Melsh said, who keeps her office stocked with candy for children. You’re saying goodbye.”

“I’ve been through their children being born, their parents dying,” she said of the clientele. “We’ve lost a lot of good people.”

This week, about a dozen women, from a league that began when the building first opened, occupied a handful of lanes — playing one final game.

They included Manhattan Beach resident Linda Gill, who began bowling at PV Bowl in May 1971 on the Up and At ‘Ems team; she has outlasted many of her peers.

“There’s no one in here that was here when I started,” she said. “I hated to get up this morning and come bowling because it was going to be so sad.

“My car is going to want to come here next week,” she added, “because I’ve been doing this forever and ever.” 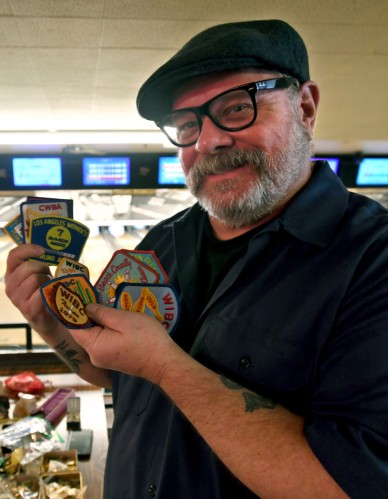 After 61-years in business Palos Verdes Bowl will close its doors on Friday. Kim Reynolds with some of the many patches his mom earned playing at the bowl before she passed away recently, in Torrance on Tuesday, January 28, 2020. (Photo by Brittany Murray, Press-Telegram/SCNG)

Kim Reynolds, who was watching the women his late mom, Maureen Reynolds, used to play with until the last year of her life, recalled that she watched the place get built and became a regular for six decades.

Kim Reynolds, for his part, has been giving his mother’s patches, pins, balls and other bowling memorabilia to her friends with the Up and At ‘Ems and other teams before PV Bowl shutters for good.

Kim Reynolds never shared his mom’s passion for the sport, though; he preferred to nurse a whiskey at The Cove, the “great dive bar” inside the bowling alley.

“I’ve been coming here since I was in diapers,” he said. “There’s been times I’ve come in with a couple of buddies and we have our balls and our bags and everything and we go as far as the bar and that’s where we stay. We won’t even bowl.”

But even though PV Bowl may soon be gone, many of those who made the alley what it was will move on.

Melsh will become manager of Cal Bowl in Lakewood; many of the regulars plan to move on to Gable House on Hawthorne Boulevard and join a new league. The Up and At ‘Ems will live on, too.

And Kim Reynolds, — who said he is hoping to persuade the owners to give the cool neon sign to a Los Angeles conservation group, which plans to remove and preserve it at their cost — will have to find another favorite dive bar.

“This is a classic bowling alley and it’s a shame to see it go,” he said. “It’s going to be weird to go down Crenshaw and not see the bowling alley there.”

The bowling office is temporarily closed for walk-in business. For quickest response, please email us at info@slacusbc.com. Membership cards can still be processed if they are mailed to the office. Thank you.